In the year 225 A.F. there are 11 major kingdoms on the continent of Valice and several lesser-known regions of various tribes. 5 portals are spread across the land and three sacred sites (structures still standing from the the original age of FéLorën (O.F.) Two portals, both of which are sacred sites, are under the control of the dwarven kingdoms of Borehn and Braxton: The Ice Portal and the Cliff Portal. The Forest Portal is controlled by the Elves of Xyntharia, and the Sun Portal is controlled by the human kingdom of MacNeil, while the Desert Portal stands unclaimed in the Redlands. Tensions are on the rise between the Mullen Empire and the Vixus Empire as they seek to dominate the last unclaimed portal.

The human kingdoms have spread their dominance across the land from east to west, governing the largest portion of the landscape. The
human influence has changed the culture of Valice and seems to suggest the reign of humankind is inevitable.

The Dwarven kingdoms in this age have been reduced to just two, as “The Great Passing” (the dwarven extinction) was already well underway.
Stubbornly, they hold steadfast in this age, fortifying their wealth and closing themselves off to a life of privacy, perhaps to hold on to what little remains.

The Elven boundaries have not changed for many of years, choosing never to enact war or desire the need for expansion. Their aim has always been designed to protect the forestland under their control and remove themselves from the historical drama of other nations, which tended to rise and fall around them. However, the elven numbers have been reduced greatly since the conclusion of The Final War, where their sacrifice to defend Valice was of extraordinary significance.

There is just one Orc nation, but the Orc population is much larger than it would appear, since most Orcs do not prefer governance. The vast
majority prefer living amongst the other nations of the world, except the kingdoms of elves. Elves, for the most part, are unaccepting of other races living amongst them.

Goblins have been reduced to just two tribes, with little presence in the sun’s light. Choosing a life below ground, their numbers at
this age are unknown. History had proven that a rising population of their kind always leads to inevitable outward invasion. When defeated, they retreat to the caverns beneath until their numbers grow again. 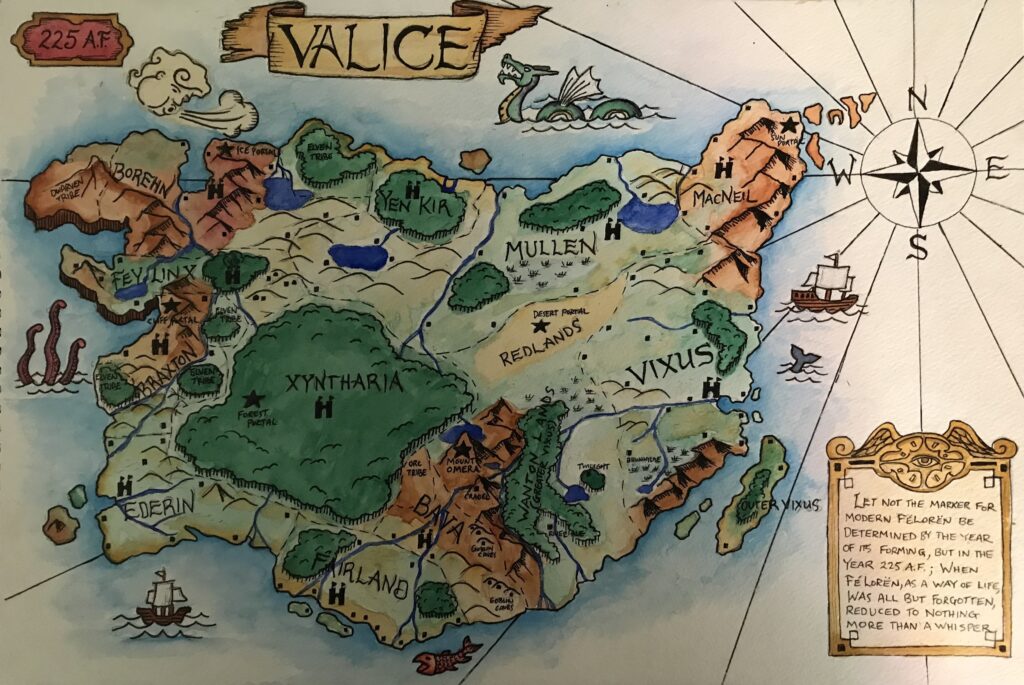 Redlands: Vast desert region, unpopulated. Named after a series of skirmishes that soaked the desert in blood, the Redlands is home to the Desert Portal, the only unclaimed portal on Valice. Dangerous, wild habitat exists in this region.

Wanton Lands: This terrain is otherwise referred to as Greater Vixus, as the territory is considered under their reign, save for the inability to maintain dominance over it. It is overrun by independent tribes of mixed races, the majority of which being humans who have defected from Vixus control. It is overrun with wild creatures and has returned to a more primitive, uncivilized state, in one respect. Although, it has bred innovation in governance and has birthed progressive ideals, as the tribes have sought alternatives to tyrannical rule.  Home to many outlaws, the Wanton Lands is a dangerous, and at times exciting, place to live for those who wish to create their own path and experience freedom in its purest form.

Enter your address to receive future news and stories by Galemine Gremn for free!